note: A jupyter notebook version of this post is available here.

Typically if you allow the random walk to move between nodes by selecting the next node uniformly from the set of connections the collection of nodes you end up with in your orbit isn’t a uniform distribution of the network nodes. Instead you get something biased towards nodes with higher connection counts. There is a trick to modifying the nature of the random walk so that it gets a uniform distribution across all the network nodes. This is known as the Metropolis Hastings algorithm which basically chooses the subsequent nodes in the orbit with higher probability if they’re less well connected.

In the case of the small graphs we’re going to look at this sampling method isn’t really needed because you could just choose a random sample from the nodes. This type of technique is useful for sampling networks from which you cannot just draw a sample. In the case of twitter for instance you cannot select a user at random. In order to fix this you could run a Metropolis Hastings random walk on the network and after a long time you’d get the sample your want. (It would be a very long time. Twitters API rate limits basically make this impossible in reality, I tried)

Suppose you have a collection of states \({s_1,...,s_n}\) these will be the nodes on the graph. Imagine a little chap we’ll call a walker whose sat at one of these nodes/states. We’re going to denote the probability of the walker at \(s_i\) moving to \(s_j\) as given by \(p_{i,j}\). I’m going to use node and state somewhat interchangeably. The difference is just that a node is a specific node in the network whereas I guess a state refers to the state of the dynamical system. So the location of the walker for instance, which would be at a specific node.

The states/nodes can really be anything, for instance they could encode letters and the probabilities \(p_{a, b}\) would be the probability for finding the letters ‘a’ and ‘b’ next to each other in a sentence.

Before we start I’m going to import a tun of stuff. The pairwise function will be useful for turning orbits into pairwise transitions in points. We can then use this to count frequencies of transitions and then approximate probabilities. I’m going to use it to train approximations of transition matrices for sentences where a sentence is an orbit on a network with letters for nodes.

The first is a walker class. We’re going to use this to generate random walks from the graph. It stores only a single state so for instance perhaps the letter ‘l’.

The next is called State and represents distributions of walkers. So picture each walker as an individual in a population. Suppose for this population 50% of the walker individuals are sat on the letter ‘l’ then we represent that by setting the dictionary value for ‘l’ to 0.5. This is a vector representation of how things, in this case our walkers, are distributed across the network. Most of the methods I’ve defined on this class are for visualizing the distribution or creating specific forms of the distribution. We’ll see more later.

The third is transition Matrix class encodes the probabilities of transitions in states. In this case we’re looking at transitions between letters. This class acts on each of the Walker and State classes via the __matmul__ method (more bellow). In the case of the Walker class the matrix will randomly update the node/state the walker is at to one of the nodes it is connected to. Where the likely hood of it choosing a particular connected node is proportional to the transition probability \(p_{i,j}\). This class can also acts on the State class. If we’re thinking of the State class as a representation of lots of individual Walker classes where a 0.5 value associated to a node/state means that 0.5 percent of the population of walkers are located at that node. The action of the transition matrix class gives a new distribution of walkers after each of them have taken a random step. The density picture of a population of walkers is really just a heuristic. What this vector represents best is the probabilities of finding a walker in a specific place. The action of a transition matrix \(M\) on this density vector at time \(t\), \(v(t)\) is just matrix multiplication. So:

this just tells us that the new density of walkers at the state \(i\), is given by the density at each of the states times there transition probabilities from that state to state \(i\) i.e. the value \(M_{j,i}v_j(t)\).

The main feature of the above class is the __matmul__ method. This means if we have an instance T of a TransistionMatrix class and an instance w of a Walker class we can write:

Then in the __matmul__(self, other), we have self as the TransistionMatrix instance and other as the Walker. I’ve set this up to evolve both States and Walkers so the method first checks which the other object is. In our case it’s going to be a Walker. self.p is a dictionary that encodes the transition probabilities. self.p[other.state] is the set of connected nodes and probabilities from other.state or the node on which the walker is sitting.

so we get the probability vector: self.p[other.state], we unpack the states and the probabilities and then use pythons built-in random package to choose one at random in proportion to the weight vector. We then return a new Walker in that state.

Note you don’t need to use @ there’s nothing special about this operator, it would probability be more readable to create a method called multiply instead.

So I’m going to get the transition matrix associated to the letter pairs in the above introduction. The class essentially counts through each adjacent pair of letters and records the frequencies they occur. It then normalizes these frequencies so that given a state the sum of probabilities for transitions to each other state from that state is 1.

So now we can see which letters can go to which other letters and how likely they are to do so. We just look at T.p['u'].

We can verify the sum of these values is 1. The set up here is all done in the _normalize and _count methods on the TransistionMatrix class

So first lets draw a orbit from the state space by iteratively applying a transition matrix to a walker.

We can compute the probability of a given orbit by multiplying the probabilities of each of the transitions. So given an orbit \(o=[s_1, s_2, ..., s_n]\) it’s likelihood of occurring is:

The outcome is very small which is to be expected given that the number of possible orbits grows large fast.

Lets quickly rehash the State Class. So the State class represents distributions on the set of letters that make up the nodes of the network.

This can be represented by a density that’s uniform across all the letters. This is representative in that if we took a sample from it the probability of us drawing a particular node is the same as drawing any other. These types of samples are important if your trying to talk about the average member of a population.

I’ve defined a class method that builds this probability vector for you (The assumption of Metropolis Hastings is that this is unreachable, i.e. we cannot sample from this distribution): 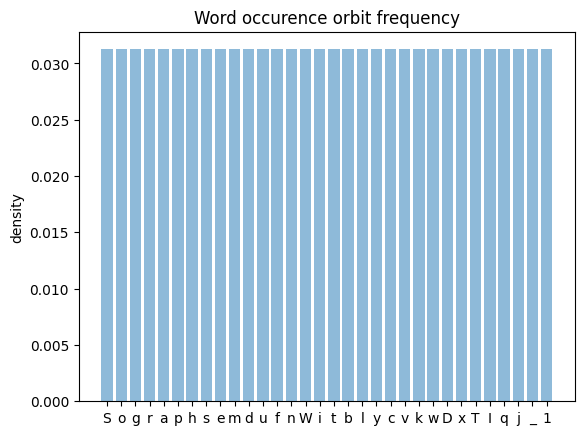 Lets now see what the distribution of letters looks like when we take a sample from the network by running a Walker on the network for a long time and storing each of the nodes that it arrives at along it’s path. 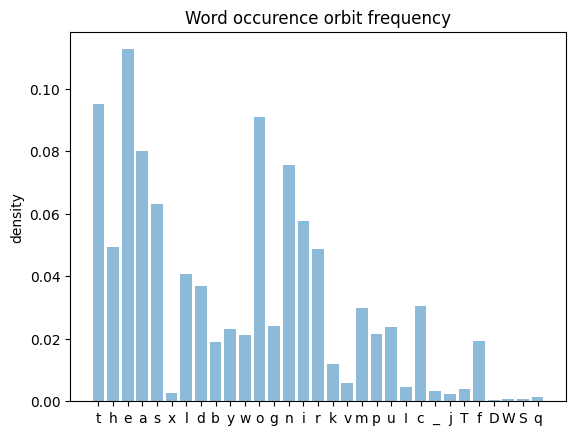 So this clearly hasn’t converged to a representative sample of the network as it’s heavily biased towards certain nodes. To talk about convergence more clearly we need to define a metric by which to gauge how similar two distributions are.

To get this we just subtract the two vectors from each other, sum the square of the differences and take the square root of the sum.

I’ve added a dist method to the State class that computes this quantity. So for two equal distributions we get:

and for two unequal distributions we have a value greater than zero:

this gives us a method for examining convergence of orbits and allows us to numerically answer:

Note: This is not a fast way of doing this, but it’ll do 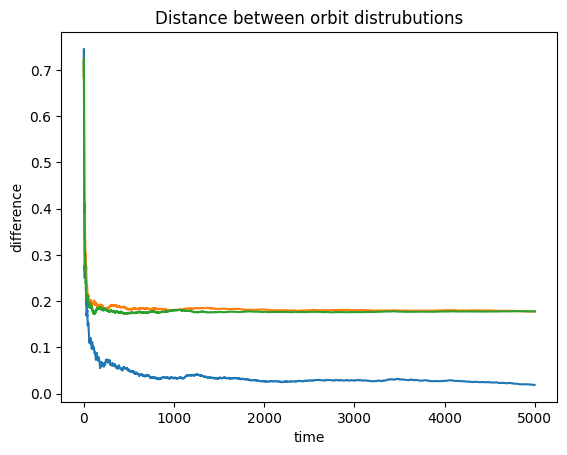 So above we’re running two orbits from different initial points. ‘t’ and ‘o’. These orbits converge towards each other as demonstrated by the line that slopes down towards 0. Both of these orbits however don’t converge to the uniform distribution which is represented by the two lines that plateau around 0.2. In the next post I’m going to show how Metropolis Hastings Algorithm can be used to adjust a random walk so that it converges to the uniform distribution.