So I’ve recently started looking at Reinforcement learning in my spare time because it just seems like a pretty powerful tool. I feel like I sort of threw myself in the deep end in that I have no experience with any of the usual machine learning frameworks and while roughly I understand the underlying theory behind it all I was pretty rusty and Reinforcement learning turned out to be a slight departure from what I already knew. This post is going to be a summary of my experience.

As an example in the openai lunar lander gym problem the environment is the moon surface, the landing site and the position of the shuttle. The actor is the spaceship and the actions it can take are the firing of each of it’s engines or the choice not to do anything. We want to train this actor to successfully move between states in the environment so as to land itself at the landing location.

There’s a couple of approaches to solving this kind of problem. The one I was primarily interested in and spent the most time looking at where policy gradient methods. In policy gradient methods you essentially have a function that tells you how your agent is going to behave given any state in the system. Initially this function is random and useless but by using it and keeping those actions that it suggests resulting in good outcomes and throwing those that result in bad outcomes you slowly improve it until the set goal is achieved.

The normal approach here is to make the policy function a parametrised neural network that takes the states of the environment and gives as output a probability distribution describing the actions likelihood of having a good result. If you sample an action from this policy and it goes well then you compute the derivative of the policy density function at the sampled action and then use gradient ascent to make that action more likely for that state. And vis versa if it goes badly you do the opposite.

Usually you don’t actually know if a given action was good or bad until later. This is really the crux of the whole thing, because maybe something the agent did at a time \(t_{1}\) made a significant difference to the outcome that results at time \(t_{2}\). If the time interval \(t_{2} - t_{1}\) is big then it’s not clear that there should be any relationship between the action at \(t_{1}\) and the outcome at \(t_{2}\). There are ways around this in that you can try and shape the rewards allocated through out the training. If you want an agent to learn to walk then maybe its good to reward standing as an action first. This becomes messy though because it’s hard to define what behaviours to reward in between the random behaviour and the end goal. Not just this its also pretty labour intensive.

Both rl and software development suffer from weird bits and pieces of domain specific knowledge. This kind of thing just comes with the territory. The kind of thing I’m talking about here is stuff that’s hard to search for because you don’t know specifically what’s going wrong. An example is not knowing that you would typically normalize inputs before feeding them into a neural network. If not knowing and thus not doing this causes your training to fail it’s not something your going to know to change, because, well you don’t know to do so, at least not until you somehow stumble across it while searching around on the internet…

In software development we get error messages when stuffs broken. In contrast in rl you get nothing and instead are left to form vague hypothesis about why it’s not doing what you want it to do. This it the aspect of the whole process which is perhaps the most frustrating. Instead of having a clear obstacle to navigate you have a collection of possible issues. Even worse sometimes there isn’t even an issue and what you think is broken is actually just slow, or your logging the wrong thing. My feeling is there you its the sort of thing that requires intuition born of experience where you eventually learn to pick up the subtle indications of each different type of issue, and know the types of things that might solve that issue. It’s almost as if through an iterative process we’re learning to keep what works and discard what doesn’t…

I don’t have a great deal of experience of machine learning in general but I have a feeling that rl departs from ml in the sense that it’s hard to ascertain when something is learning. Usually in ml you have a loss function which is the object your looking to minimize. While training you can graph this function and it’s typically close to monotonic. So while it may not be improving fast and it may not be converging to a global optimum you do know whether or not it is improving. In reinforcement learning you get something completely different. Sometimes you get this: 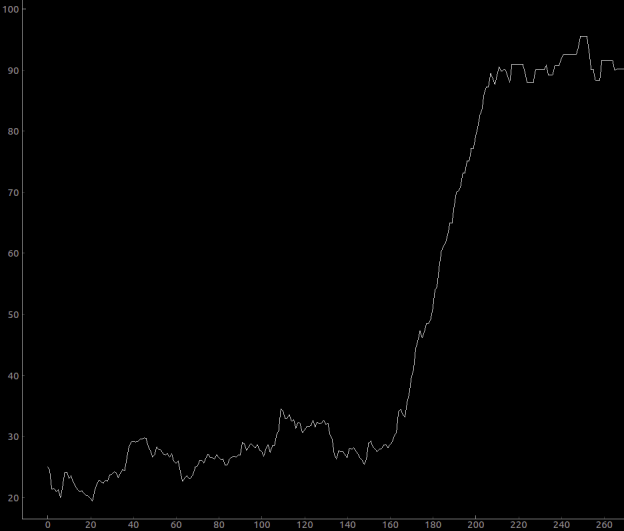 And then sometimes you get this: 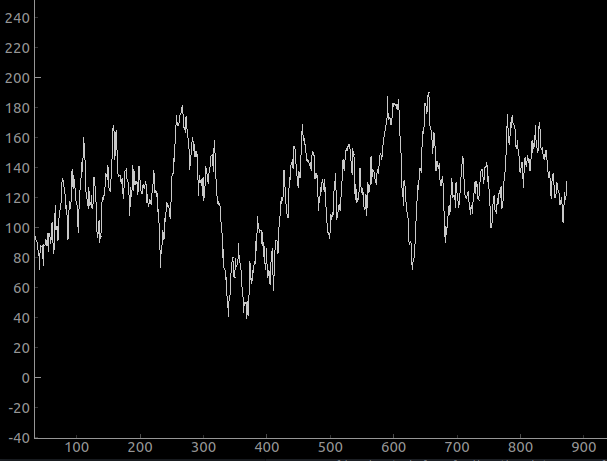 The inherent variance in policy gradient methods seems to be a function of two things (or a couple of very vague hypothesis):

It was this that probably led me to bang my head against a wall the most! Often times you watch the performance of the actor improve and improve until it’s doing really well until suddenly it plummets to perform worse than when it started. In retrospect this isn’t always a particularly bad thing in that in being redirected there the actor will learn how to navigate said poor environment. Building in redundancy like this should result in stable solutions that apply under perturbation.

These issues led me to take a kind of messy stop and start approach to the training of the some of the rl environments. I’d save the model during training when it was doing well and then revert to the save point if it then flat lined. This may have been more to do with my psychology than any sensible strategy but over time the model did improve even if that approach was disappointingly messy.

Reinforcement Learning is very interesting, both in theory and application, and it seems to be pretty powerful in the sense that I can see there being problems that it can solve that would be very hard if not impossible to code solutions for. I’ve been way more negative in the above than positive but I’m pretty excited by this stuff! It’s pretty remarkable that these methods work and you get solutions that seem somehow natural.

However it’s also been a little annoying too. This is partly because the initial learning curve seemed to be a lot steeper than I expected and also because my expectations in general where way higher than they should have been. I didn’t try but I suspect in the time it took me to obtain a solution to the lunar-lander environment through training I could have easily coded a programmatic solution and with way less of me hitting my head of a wall. I might be very wrong about this though. I think this is the major con in that whenever you set out to solve an problem using rl your kind of making a bet that it’s going to be easy enough to do so. There are a lot of unknowns and they don’t seem to be predictable in any particular way. Like maybe it just happens to be the case that the way the reward environment has to be shaped your very unlikely to ever have the model get to the point where it’s making progress. It’s also just hard to ascertain progress. My feeling is that if you can write a programmatic solution to the problem then you should probably always prioritise doing so. RL becomes super interesting when we find ourself in the domain of problems that cannot be solved by hand.

The most enjoyable aspect of the whole thing so far has definitely been watching the way that once the lunar lander has hovered down to the final 5 pixels it then drops onto the moons surface in a weirdly human way. As if there’s actually some guy inside who just flips the engine off switch to bring the vehicle down to ground*.

* I have no idea how to land aircraft