It’s been a bit of time since I last posted. I’ve had a lot of work on recently but I’ve started working on a new project that’s been the motivation for learning a lot of this reinforcement learning material. Namely I want to build robots and train the control systems for these robots using reinforcement learning algorithms. Thus far the algorithms I’ve discussed here have been for discrete action spaces. This doesn’t work for continuous control systems of the type I’m hoping to create. This post will be a rundown of deep deterministic policy gradients (DDPG) which is a reinforcement learning algorithm suited for continuous control tasks. This means stuff like motors that can apply a torque with a continuous range of values rather than one that is either on or off. In this post I’m going to talk about theory but mostly only to explain the stuff that it took me a while to understand.

So I think it is actually possible to use REINFORCE to do continuous control. What you’d do is have a policy (function that given a state suggests an action to take) that generates a continuous probability distribution. You could do this by having the model output a mean and a variance and then sample an action from the distribution those describe. You’d have to use importance sampling to ensure the actions the policy is more likely to suggest aren’t overweighted in the reinforcement learning updates. Then at the end instead of using that probability distribution to sample actions you’d just take the mean itself as the action and ignore the variance. This is very similar to the discrete action case but instead of a probability vector your having to get the model to describe a continuous distribution instead.

I tried this and struggled with it. I’m not sure why exactly but in the end I read about DDPG and the consensus seemed to be that it was best for continuous control tasks. DDPG differs from REINFORCE in a number of ways. It’s similar however in that it still uses a policy. The policy is the core object we’re interested in here. Initially it’s just going to suggest random actions but by the end of the training it should have learned to solve the environment in order to maximise rewards for the agent. The differences are as follows.

When training DDPG We use the policy model, plus some noise for exploration, to sample from the environment the values (state, next_state, action, reward) that we then place in the replay buffer. You might ask why we need the policy model seeing as we can select actions to take given any state by finding the action that maximises the critic. The reason this typically isn’t feasible is due to the size of the action space. If you have a discrete action space there are usually a smaller set of possible actions you can take, think 2 engines for the Lunar-lander each is on or off, making 4 possible combinations of values in the action space to maximize the critic over. In this case it’s feasible to maximise over. Whereas in a 2 dimensional continuous action space to maximise correctly you’d have to subdivide each dimension into small bits and then consider all the combinations which would end up being \(n^2\) where \(n\) is the number of subdivisions you make. If now you consider \(m\) dimensions it’s then \(n^m\). This quickly becomes prohibitive.

So maximising over the critic takes too long and instead what you do is use this policy model that tries to maximise the critic as it changes over the training period by climbing it using gradient ascent. This basically means that instead of starting from scratch every time you search for that maximising value you instead use the policy to track the correct value over time. The issue with this approach is that the policy may get stuck in a local maximum.

Training with DDPG uses two rounds, the first updates the critic using temporal differences and the second updates the policy by gradient ascent. Bear in mind that at each training step the set of values we have is sampled from the replay buffer and takes the form: (state, next_state, action, reward)

If the critic is untrained then it won’t equal the above but we now have a target to train the critic towards. Namely the difference in the above:

To update the critic on each training run your going to minimize the above using gradient descent over the batch of samples you’ve taken from the replay buffer.

To train the actor/policy is simply just a case of asking it to climb the critic function. So if you take the gradient of \(C(s_i, P_{\omega}(s_i))\) with respect to the policy parameters given by \(\omega\) you can compute how best to change \(P\) in order to increase the value of \(C\). Again you do this over the batch of samples take from the replay buffer.

So the above is a slight simplification in that it doesn’t talk about the target models we use to add stability. Basically when you compute 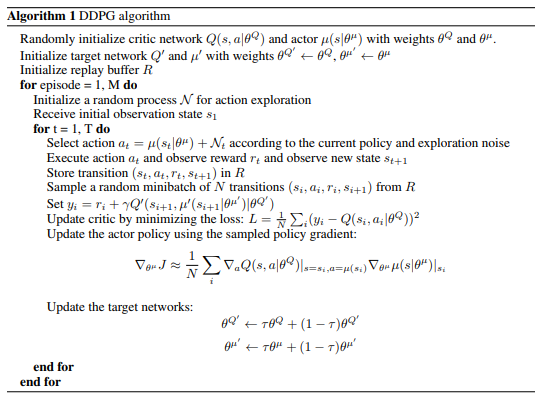 It’s kind of hard to believe the above works. So here is proof it does: